Tall Paul got in to magic when he was only 6 years old. His brother, David, got a magic set for Christmas and performed the tricks on his birthday. When Paul saw the cups and balls trick, he was hooked. He had to know how those little balls went through the cups. Well, being a good magician, David wouldn’t reveal the secret. Determined to know how it was done, Paul went to the library and checked out a book called The Amateur Magicians Handbook and the rest is history.  David, however, didn’t think Tall Paul was a magician until years later when a ball floated around the room. The same method can be seen in his Halloween show.

Tall Paul has earned his way to being a magician buying his first tricks with money from raking his grandma’s yard and walking to the grocery store. In the toy section there were small magic effects that anyone could do. Some of the ones he bought all those years ago are still being used by him.

He later discovered sleight of hand and coin magic. For a time, he was known among magicians as THE coin guy… at least locally. Now his love of magic comes in the form of shows at schools and libraries.

What does Paul do when he’s not doing 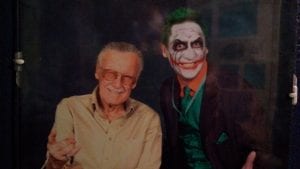 magic or balloons? Well he likes going to comic book conventions dressed as a hero or villain. He likes hanging out at home and watching Netflix and trying to keep his cat Virgil from licking his nose. He likes playing his ukulele and cracking a whip. Not at the same time though. He also likes slacklining which is much like walking a tightwire. Although he hasn’t

done it in a while, he likes riding his scooter, going hiking,

and caving too. Who knows, maybe you’ll see him on the trail soon.